Which stories get told when “Old hands in China” meet the freshest group of HFU business school students in Shanghai? 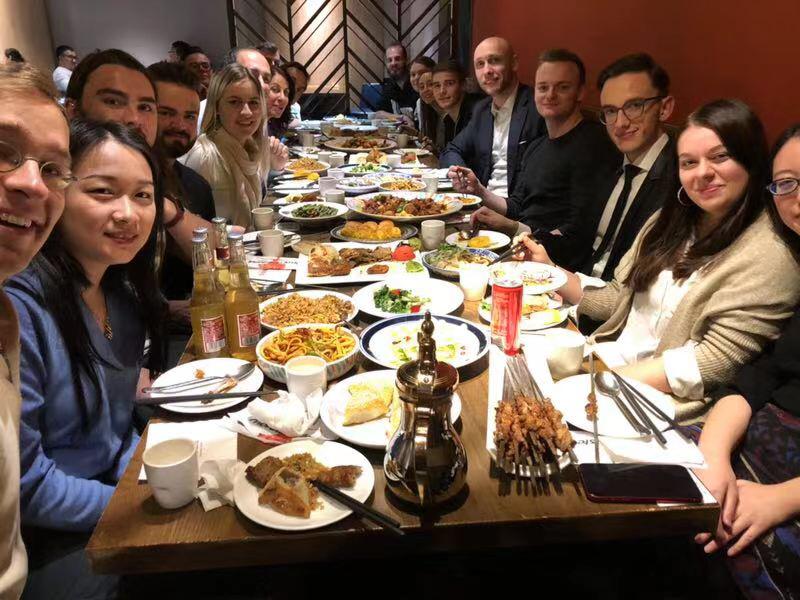 It was three weeks before Christmas, on December third, on a chilly night in Shanghai, when the HFU tribe was heard. This is how our story starts.

We gather at a Xinjiang/Chinese restaurant in Nandan Lu to eat and chat, drink and share, we, the members of the HFU business school.  The “old hands in China”, some of the first business students we ever had, meet the newest generation, the post-90’s-born students, now in China for their first time. And a feeling of tribe grows. We meet and greet and there are no borders; the stories bubble up and a feeling of belonging warms us. It reminds me of Amin Maalouf who wrote about  horizontal heritage and vertical heritage. At times we feel closer to our contemporaries with whom we have common experiences, than to those who share our hometown, our passports, our generation. This is what the HFU tribe feels like on that night in Shanghai, a mutual crossing borders of cohort, generation, and profession.

Fabian wechatted the next day:

“It was great to see a group of people doing amazing things who have all originated from HFU. I hope to have more visibility among us about what we do, so that students and other alumni in other countries can engage and benefit from the tribe.”

There must be hundreds of untold stories out there, up til now! Let us create the visibility Fabian wishes for by sharing our Shanghai story with you.

We need to go back a bit to 1995; the Business Faculty was founded with our first study program, IB, by Markus Hoch and Li Fang-Heck, the only teaching colleagues still on campus today, together with others who have since left. In 1996, the first IB profs recruited were Gerd Addicks, John Sykes and me. What has become the HFU Business School as we now know it today consists of IBW, IBM, IEB, BMP, IMM, MBA, Executive MBA and numerous other outreach offerings, which have continuously earned the reputation of first-mover study programs in Germany. The pioneering students who were willing to join us 20 years ago are still loyal to our tribe today. And in China alone, Bilgin Gungormus (IB 2001) organized the HFU group of now 81 members in China for reunions and meetups, most recently together with Fabian Knopf (IB 2009). 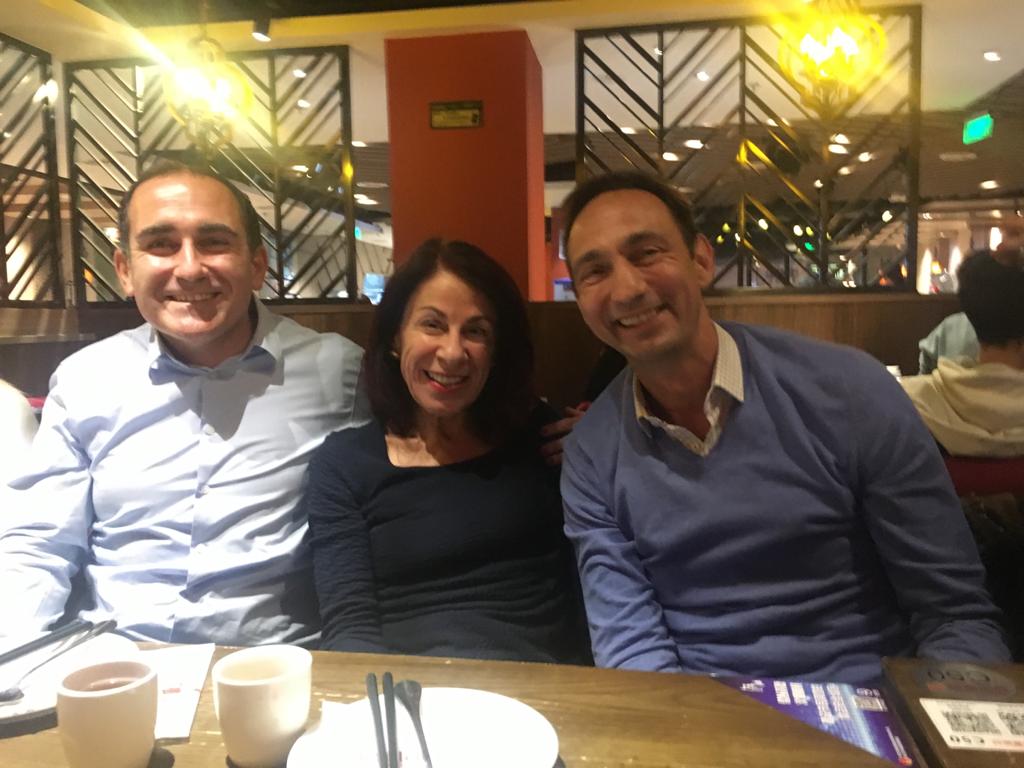 Especially for this event, an alumnus, from the first pioneer group of IB, Eric Voigt, now senior partner and founder of One-Point-Zero, flew over from Hong Kong. As an expat longer than he ever lived in his hometown of Villingen, Eric joined us for the first time since he graduated 20 years ago. What fun it was seeing him after all this time! We remembered having to hold lectures in the decrepit, poorly-heated lecture building and student dormitory, the M building, where the F building now stands. Since then, Eric has proven to be a real “maven”, accomplishing astounding ventures in business. He is also passionate about his non-profit projects in promoting education for girls in Cambodia and other parts of southeast Asia.  As an entrepreneur and investor, Eric would welcome expanding the IBAA network to investing into budding entrepreneurial activities of HFU business school startups.

The man who never sleeps, and when pushed, admits to 4-5 hours a night, is Bilgin Gungormus (IB2000), whose name is spelled here without the umlauts for our international readers. Bilgin, from the second pioneer group of IB, is a “powerful persuader” in a positive sense (see the Tipping Point by Malcolm Gladwell) with an extensive network in Asia and beyond.  Along with his day job at Allianz where he has moved up to Head of International Business at Allianz China Life, Bilgin invests in private ventures, writes children’s books, coaches and scouts for numerous football teams he has developed, and even supports non-profit NGO development projects in  Madagascar. Every time I see him, he has discovered a new insider restaurant owned by another associate in Shanghai and treats us not only to new delicacies to savor but also his most recent stories about business in China at the front. 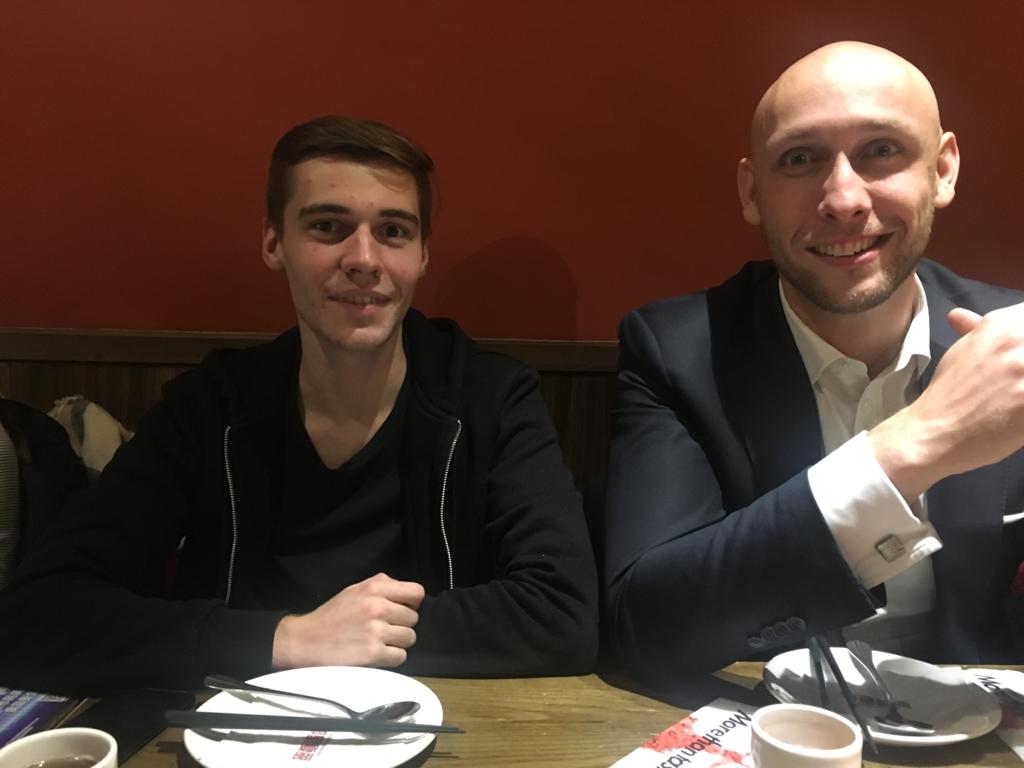 The other serious “connector” is Fabian Knopf (BBA 09), now China Legal Consultant at R&P China Lawyers with HQ in Beijing. Fabian once again planned his appointments around our reunion to come down to Shanghai. Fascinating for me was to hear how this alumnus of ours has developed, from having a bachelor’s degree in international business to a decade later, now with a deep niche knowledge of the legal, tax and financial intricacies and tricky hurdles which foreigners confront in joint ventures, FDI, WFOEs, and FIEs in China. One of Fabian’s many untold stories is his support for our thesis candidates in their research on global virtual teams and working in Asia. 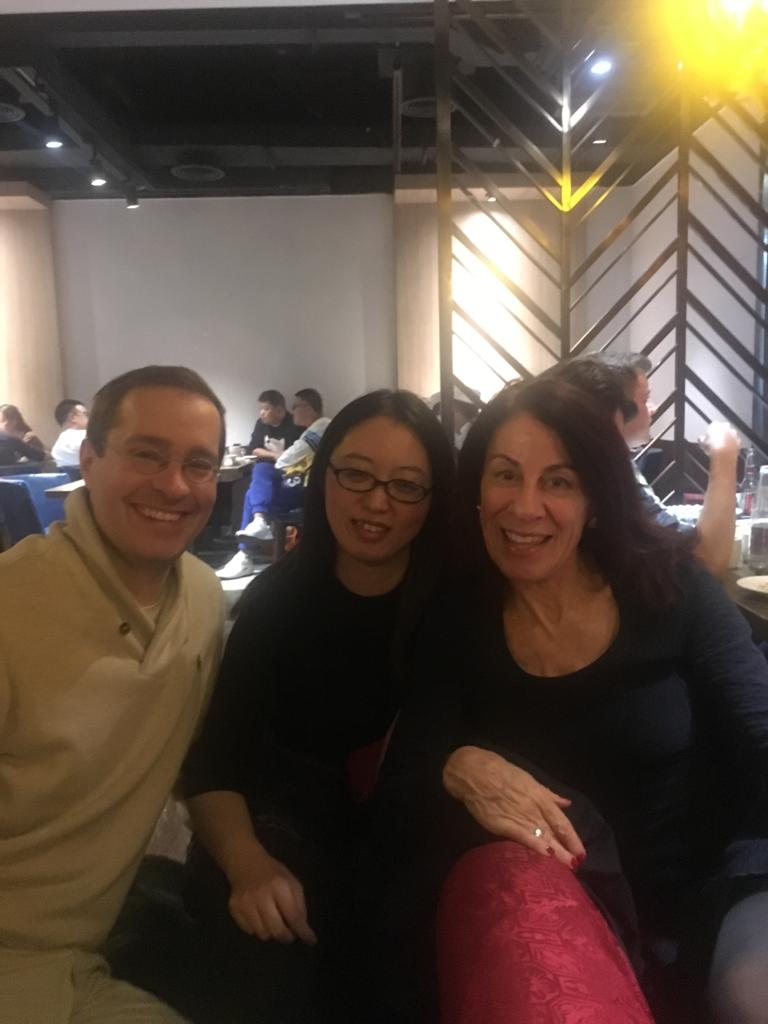 Norman Deckers, (IB 2006), Head of Controlling Asia at the Swiss EMS-Chemie in Suzhou, previously at Beiersdorf, and Bastian Baisch (IBM 2011), Global Supply Manager at Apple, previously at Hella,  and with a Masters from Denmark, filled our evening with their stories which will not be revealed here.

For all of our alumni, working as expats, having bicultural relationships, and experiencing the fast and unpredictable changes on the mainland have toughened them up to the challenges in China, while at the same time, softening them down to becoming more flexible and agile.  After an evening of everything that a Chinese banquet has to offer, with the requisite drinks afterwards, Norman offered our students now at Suzhou University a visit to his location that very week, to expose them to a Chinese factory and daily operations in China, and share valuable advice on obtaining internships in China. He just texted me that he “enjoyed the vibes of the young tribe who came to visit”, but what he means by that will have to remain a story to be told.

The students, Max, Kristina, Daniel, Simon, Julia, Nikolay, Romy, Marc, Tabea, Julian, Niclas, comprised IBM and IBW students doing their study abroad semesters at USST and Suzhou. Before meeting the alumni, I prompted them to consider what they wanted to learn from our graduates. Julian Rombach (IBM-5), (no, not related to Alexandra, although he has been asked that tens of times!), said “It’s not where my older co-alumni have ended up, or how many kids they now have, but rather, what is their story? Now, with hindsight, what have they learned from their choices?” His classmate Niclas Rehs, also IBM-5, shared his strong focus on corporate culture as the essential criteria for his search for an internship. The company which spoke to his heart advertised, “we want you to successfully complete your projects with us”. These members of the student cohort do not fit the negative and spoiled stereotypes held about this generation. Bringing an idealism about what matters, wanting to make an impact, with a desire for autonomy and responsibility for their own projects, they interacted with the “old hands” self-confidently and authentically. While a foreigner’s experience of China these days has become much more comfortable through digitalization, VPN, Baidu, Apple Maps, Wechat and Alipay, these students still have to go through the loops of cultural adaptation to figure out how to thrive in in a new cultural environment.

I asked our alumni and students to share some comments for our newsletter, with the hope that this encourages other expats from our Business School to also give back through the IBAA newsletter by sharing their insights and stories.

Bastian wechatted, “Being an expat for a long time, in my case more than 10 years, is a great experience; it changes you. I am becoming less and less German. So being aware of this when returning back to Germany at some point and being prepared for the reverse culture shock is essential.” (Remember the classic W-curve of the cultural learning cycle? That’s what Bastian was referring to. NH.)

Fabian texted, “Something I have learned working/living in China recently: I was surprised there are so many HFU alumni out there in China. And in addition, I realized again that we build environments for ourselves inside of different cultural settings to feel comfortable. I was recently confronted with a situation that didn’t seem different at first but ended up pushing me back into a temporary feeling that I haven’t experienced for a while. That was a nice reality check for me and I recognized, yes, I can cope “.

Bilgin was happy that we loved the food at Yershari, which he had scouted out for us. And he left us with three simply worded and deep insights based on almost 20 years of experience abroad: 1. “When you think you have experienced, felt and seen it all in a country, then something new happens and you realize you have to admit to yourself once again that you were wrong”. (Do you all remember the metaphor of the onion of culture? We peel back a layer and think we know the essence of onion, until another layer reveals itself to us, and then we know that we don’t know. NH.) 2. “ Having a plan or a strategy is equal to not having it at all, without it, you often end up in a better position by just remaining very flexible and adaptable.” (Think of Bruce Lee and Be water!) And finally Bilgin’s last reminder: 3. “When you expect failures will not happen again and then, oops, you realize you should not have taken this for granted.” This is perhaps what we expats love about our expat life, we keep on learning, and it’s never boring or routine.

Learning the expat life and studying at the studying at the prestigious Tsinghua University in Beijing, Daniel Kulina, IBM-6, contributed his insights after a year in China, “… in order to fully immerse yourself into a different culture, it is essential to stop comparing certain behavioral aspects to what you are used to. …I have truly learned a lesson for life.” 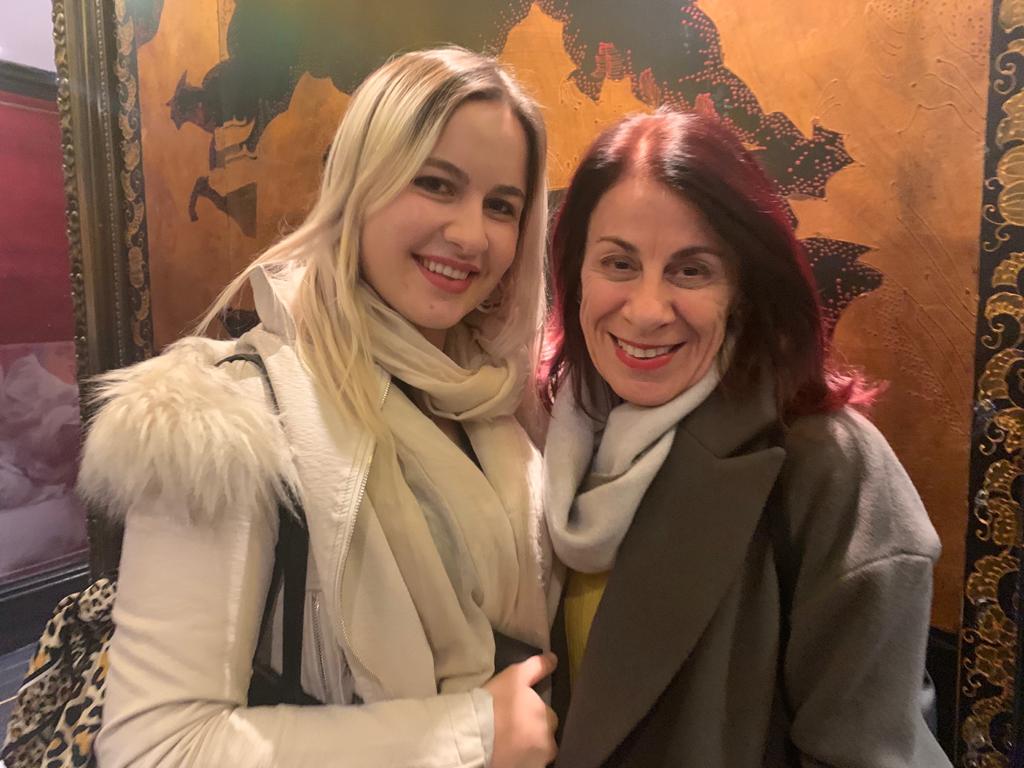 One last story was told by a young Swiss-Macedonian IBM-5 student, who has an entrepreneurial mindset and the energy to match, Kristina Atanasova. Without any Chinese language preparation, she decided nevertheless for a semester in Suzhou, as she said that understanding China will be essential in her future business life. She is thankful for the lessons this country gives her. She emailed, “China is changing me, every day. It was a real struggle with the language and culture and has been a life-changing experience for me. My cultural deep dive started on the first day this environment pushed me completely out of my accustomed spaces. This uncertainty is making me a stronger, more independent person. At last I can say that I understand and agree what a professor said to us, “You only really learn “on the edge”, outside of your comfort zone”.

I thank you, alumni and students for your authenticity, for sharing your stories and taking time for what really matters in life, the people.

And to the reader, we look forward to YOUR stories, told, untold and yet to be told.